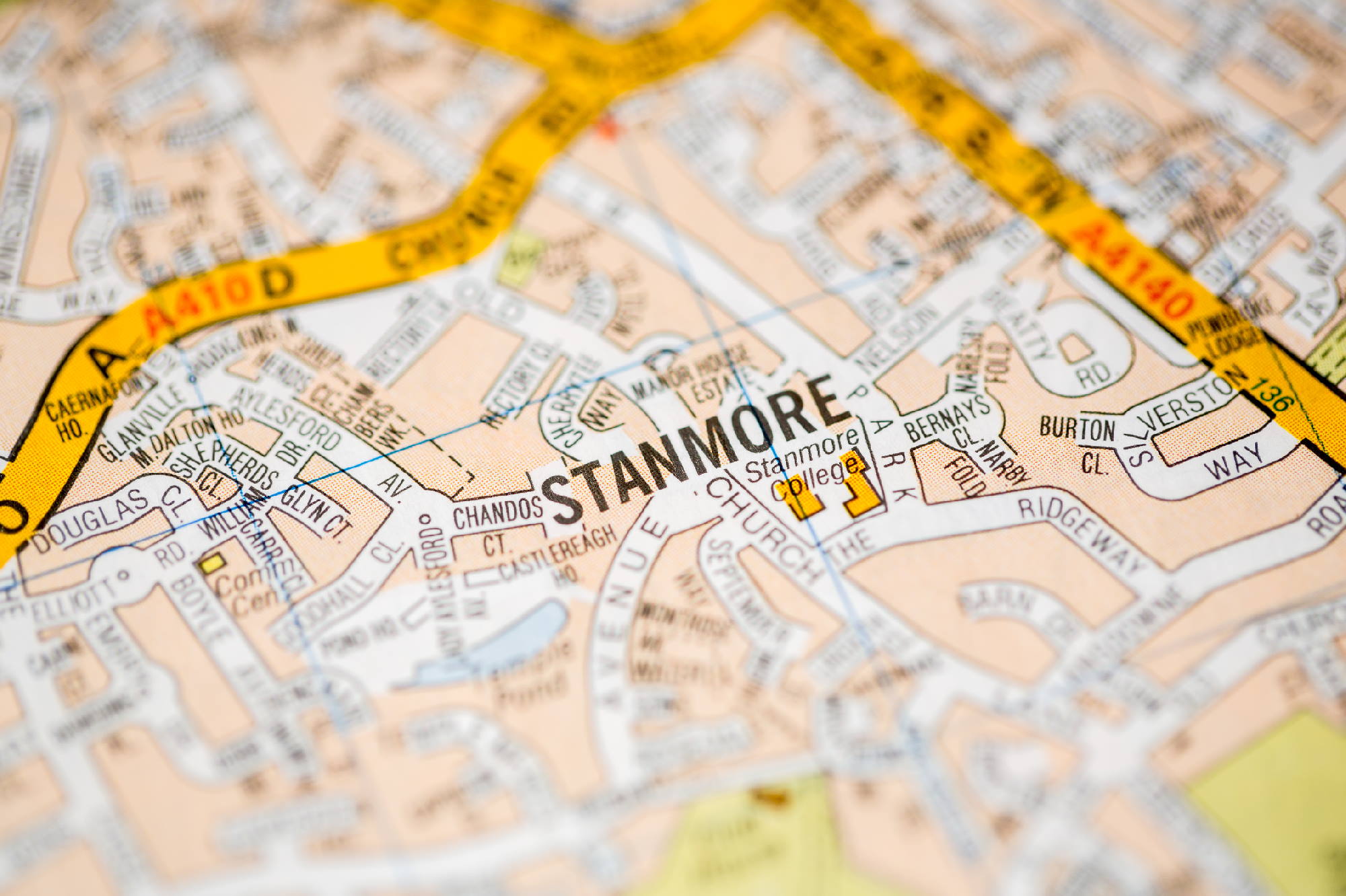 Stanmore, at the end of the Jubilee Line in North West London, probably feels a million miles away from the centre of town when you first start exploring the area.
But at a mere 14 miles from central London, buyers and renters in this hugely popular part of the capital, quickly fall in love with its traditional stock of amazing properties, great schools, superb transport links and zone 5 prices.

Stanmore is what you might call a quiet suburb - and, yes, there really is such a thing within the confines of the M25!
Sitting neatly between Edgware and Bushey in North West London, Stanmore's beautiful properties are matched by its acres of woodland and commons - genuine peace, quiet and fresh air in London.
Stanmore is also known for its grand mansions, one of which, Stanmore Hall, has featured in many film and television programmes.
Throw in three local nature reserves, great schools and road and rail links and it's easy to see why buyers and renters put down firm roots in Stanmore.

Houses for sale in Stanmore

Property for sale in Stanmore is a great mix of Georgian gems, 1920s and 1930s semi and detached family homes and the modern flats that have arrived alongside development of the area over the past decade.
Some bungalows are also available, as well as houses from the early 2000s.
Stanmore's average property price of just over £600,000 is competitive against other outer London superbs, with some of the area's flats within reach of first-time buyers at just over £350,000 on average.

Young professional renters seek out Stanmore for its great transport links back into town and rental prices that are well below other, more central areas of the capital.
Flats close to Stanmore Underground station for the Jubilee Line are available for around £1,500 (two bedrooms) and include a mix of modern apartments, late 20th-century flats and early 20th-century conversions.
For families, a three-bedroom semi-detached house will cost around the £1,700 mark, with larger properties commanding upwards of £2,000 per month.

Stanmore and Canons Park stations are both in zone 5 and operate Underground trains on the Jubilee Line.
Direct services into Bond Street, Green Park, Westminster and Waterloo all take under 40 minutes.

Almost all of Stanmore's primary schools are rated 'Good' by Ofsted, meaning incredible options for families looking to buy or rent in the area.
Among the best are:
- Stanburn Primary School
- Whitchurch Primary
- St John's CofE
- Aylward Primary
Bentley Wood High, meanwhile, is rated 'Outstanding' for girls aged 11 to 18, as is Park High (boys and girls, 11-18).

As you might expect from a multicultural part of North London, restaurants in Stanmore offer pretty much anything you could wish for from across the globe.
For one of Stanmore's best curries, head to SD Bar & Lanes on Church Road - as well as an enormous drinks menu, the vibrant eatery also serves up classic Indian dishes in a great atmosphere.
For succulent Turkish lamb shanks and kebabs, try Diaar on the Broadway which is massively popular with locals.
Finally, for a taste of the Mediterranean and Middle East head out to Melissa Ocakbasi in Canons Park - but don't forget your appetite as the portions are generous to say the least.

Whether it's a quick drink before dinner or a night out with friends, Stanmore has plenty to offer in and around the area.
The Seven Harrow on Kenton Lane, just outside Stanmore is worth a visit for its great atmosphere and large drinks menu. The venue also has outside space and a food menu if you're peckish.
For a bustling night out, try Trinity Bar on Station Road in Harrow, which has live music and DJs over two floors.
The likes of Bastille and Kate Nash have graced the Trinity stage in recent years.

Shops in Stanmore are grouped around the Broadway on Uxbridge Road and include:
- Sainsbury's
- Lidl
- Boots
- SCHMIDT Stanmore
- Bowley's Fine Shoes
- Caffe Nero

Things to do in Stanmore

The beauty of Stanmore is its proximity to acres and acres of outdoor space.
So, when the weather is fine, head out to Stanmore County Park, which is only a few minutes from Stanmore station.
The top of the hill at the park offers amazing views over London, with Alexandra Palace, Canary Wharf, the Shard and the City all visible.
For sport lovers, Stanmore Golf Club offers a stunning tree-lined course as well as vibrant club house for that all important 19th hole.
And if you like your football, you're in luck. The Hive Stadium at Canons Park is home to National League side Barnet, Tottenham Hotspur Women and the London Bees ladies' team.

The Bentley Priory Museum is a great day out for the family, exploring the role of men and women during World War II.
With interactive exhibits, costumes and even a Spitfire cockpit, the kids will have fun for hours.
On a fine day, head over to Canons Park where the historic parkland offers kids an adventure playground, sports equipment and an annual fun day in August.
Back to all articles